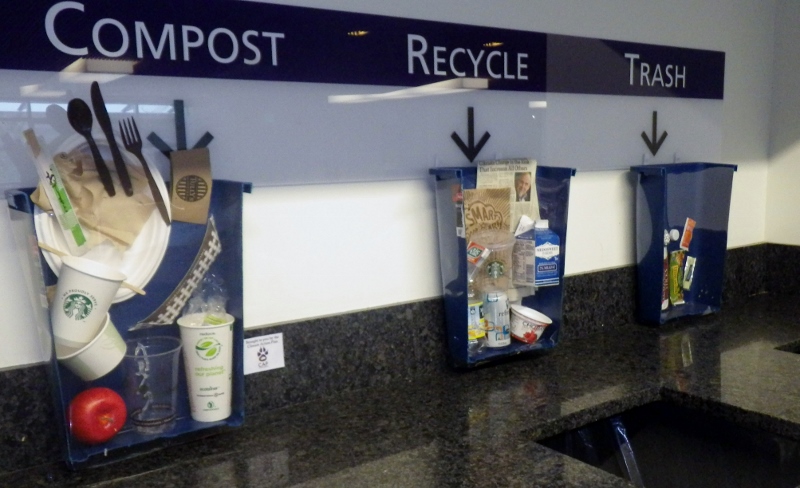 Sorting your waste at UW is now a little clearer with 3-D visuals showing ideal disposal. The new visuals, located in the HUB and By George Café, aim to simplify waste disposal on campus and encourage greater composting and recycling. UW Sustainability led the project in partnership with the UW Garbology Project, UW Housing and Food Services, and UW Recycling.

The visuals are made from waste bins cut in half and filled with items commonly disposed of on campus. A set of three visuals (compost, recycling, landfill) each show items sorted into the correct bins. This cross-section approach proved to have an improved impact on waste sorting behaviour in a two-month study conducted by the UW Garbology Project.

“We posted 3-D visuals at select waste bins in the Husky Den to test their effectiveness compared to other forms of signage,” said Jack Johnson, project founder for UW Garbology and a doctoral candidate in the Department of Anthropology.

Using a Bosch DLE 40 laser distance measurer (LDM), Johnson and his team of student and staff volunteers measured waste bins for fullness and compared measurements to determine the effectiveness of different types of signs. Visual bins ranked as the most effective form of signage with the highest differences in accumulation between recycle, compost, and landfill items.

“The 3-D visuals draw more attention and give a realistic view of what types of waste should go in which bins,” said Elise Glassman, Project Manager for UW Sustainability. “We’re already getting requests to create more visuals for other parts of campus.”

Additional 3-D waste visuals are set to be installed in the upcoming Local Point dining area in Lander Hall, as well as The 8 in McMahon Hall.